I read an Inc article this morning titled “Top 8 Cars to Buy After You Make Your First Million”. I hope they meant “when you make your first $5 million” or something rather than $1 million. The cars in the article are VERY expensive. If you just hit the $1 million dollar level in your bank account then go out and buy a $100k car, I’d say there is a good chance you’ll never see that millionaire level again. 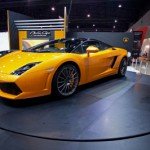 Image courtesy of foto76 at FreeDigitalPhotos.net

Think about it – you’d be spending a full 10% of your net worth on a car. Besides the huge chunk of your wealth, cars lose value as soon as you drive them off the lot. Sure, expensive and fast cars may be fun to drive (I have no idea but it seems like a safe assumption) and it’s probably pretty cool to turn heads with an expensive and potentially exotic sports car (I drive a 4-year-old Mazda so I wouldn’t know), but regardless of cool factor I would call that fiscally irresponsible.

This type of thinking (“Oh, I have a million dollars so I can blow money on whatever I want”) is horrible and unfortunately common. Do a little research and note all the lottery winners who have made similar purchases – and are broke within a few years. Or how about the movie, sports, and other high-earning people who wind up in debt and broke when their huge annual income streams stop.

How about this instead: Do some studying about finance and investing. Build a portfolio mix that matches your risk tolerance level (might be pretty high if you’d blow 10% of your wealth on a car). Now put the money into the investments at the mix you decided – and leave it alone. Say you only generate a 5% return, that’s still an “extra” $50k in just the first year. If you average 5% and leave it alone for 5 years, that’s an additional $276k sitting in your investment account (in case you are doing quick math in your head – the magic of compounding would give you that $26k extra).

Even then I wouldn’t pull out $100k for a car. As fun as it would be to drive one, how fun would it be if your investment account grew to the point that your average annual spending – perhaps evening including one or two big vacation splurges each year – was less than your investment growth? If your spending budget can be kept lower than your investment return, you’d never have to worry about working again and you’d have a nice nest egg to leave to your children (and/or perhaps a few non-profits of your choice).