I hear continued frustration from founders who are trying to raise funds. Sure, the media loves to talk about the companies that are getting funded, but in reality those popular companies have always been a very small percentage of the companies that are actively fundraising. Many thousands are having a hard time getting funded and don’t know what. Even AngelList is making some changes because of slowdowns they’re seeing. What’s going on? 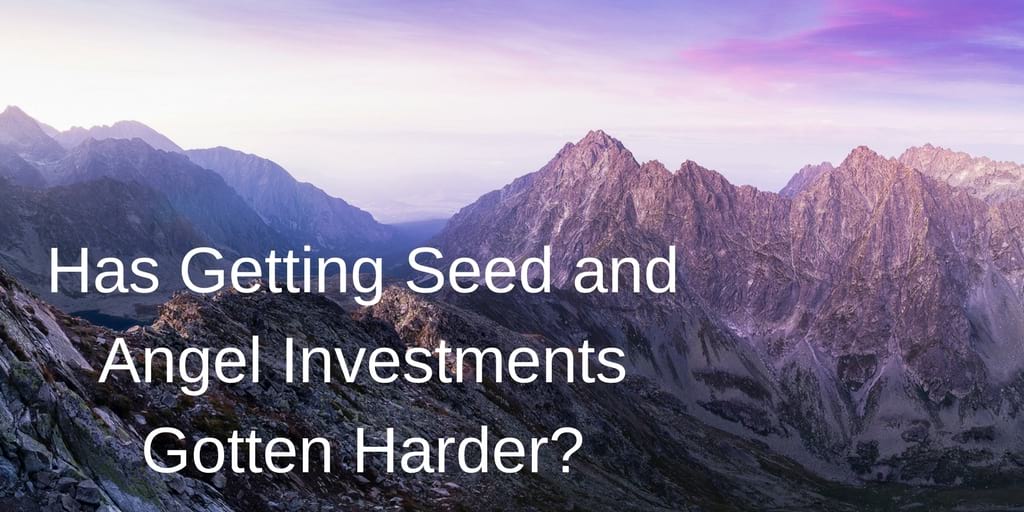 There are a couple of challenges

There are several things that are contributing to this reality that, for many, early-stage fundraising has gotten much more challenging. And as strange as it may sound, a couple of the reasons even seem to conflict with each other. But, conflicting or not, this is what’s going on in the market and in the minds of many angel investors like myself.

Too many small startups read the news about the fast-growing ventures that are raising money, then more money, then more money – at higher and higher valuations. These noob founders then get the impression their their amazing idea should be worth millions of dollars – even though they don’t have an experienced team, an MVP, or paying customers.

There are some venture capital funds that are sitting on a lot of money. The investors don’t want that money just sitting around doing nothing, so the managers feel pressure to invest it. They see certain companies who have already raised and the funds decide to piggy-back on that momentum (this happens a LOT in the angel and VC investing world). Since more people are jumping on the bandwagon it artificially inflates perceived valuations.

Those media-reported inflated valuations then cause many new founders to have unrealistic value expectations.

With the right numbers, almost anyone can get funded. If you put the right value on the venture (or idea) then someone will take a risk on it. If this is nothing more than an idea, hope, and prayer, that “right value” might be a couple hundred thousand dollars. But raising a little money at that seed stage might be just what is needed to produce a product and start gaining some client-acquisition momentum – enough momentum that leads to a multi-million dollar next round (10x gain, which is really the low-end of what an investor wants to think is possible).

Also, founders, please understand: If you say you are raising at $3m and an investor asks “why is it worth $3?” then you respond with something like “with your money we will…” – that’s crap. If you need my money to reach the valuation then it isn’t worth that valuation right now. I want to invest at today’s value, not the hoped value two years from now that you plan to achieve with my money. I want to share in that upside not prop up your business.

Besides the valuation challenges, we have this other concern…

When will we see a return?

While it may be “fun” and “interesting” to see a company who you’ve invested in continue to raise round after round at higher and higher rates, that is just paper wealth – it doesn’t pay the bills.

It used to be that angels could invest in a startup with the expectation (or at least hope) that they would see some sort of an exit in three to five years. That exit might be an IPO so they could liquidate shares on the public market (or hold them as long as they want) or it might be an acquisition by a larger company. In some cases the exit was specific wording in the agreements that allowed an earlier investor to take cash off the table when a fundraising round reached a certain point.

That 3 to 5 years stretched to 5 to 7 years, now who knows what the average range is. It seems like money deployed five years ago might still be in limbo forever with no realistic exit opportunity on the short-term (2 year) horizon.

The thing is, it used to be that there were exit plans and there were actual exits. But we’re seeing far fewer exits in recent years, which means that investors continue to pour money into companies year after year without getting any of that money back, or even having access to those funds in any way. At some point this just isn’t sustainable. I know that many of my investing friends here on the east coast, and even some I’ve spoked with on the west coast, have expressed this as a concern. Certainly not all, but more investors are holding back right now to see what the exit opportunities look like for their current holdings before continuing to deploy money.

It makes sense. The whole point of investing is to get a return. I fear that far too many founders ignore this very obvious point. They subconsciously think that the investor is doing some sort of charity work, or that the investor is happy if they just continue to raise money at higher valuations. Well, the investor really wants a cash return, not just a quarterly report that shows the value higher.

For a founder that is having a hard time raising money, and they’ve already reviewed their valuation and are sure that it is reasonable, perhaps they should consider the message they are giving – or failing to give – to the potential investors. What’s your plan to return capital to the investors?

Will it be an acquisition? If so, who might buy the venture and why? Why would they buy versus just build a solution and put your out of business? If they are interested, what metrics will they use to value your business? How will you position those metrics to maximize the exit value?

Or maybe it will be an IPO? This was super popular in the 1990’s. I had financial people calling me almost weekly begging me to let them take my company public. Many of those companies that early-IPOd were later sold for pennies on the dollar though, so I’m glad I didn’t. The early investors that cashed out at IPO made out well but many others didn’t. Largely because of the Dot-Com meltdown the IPO opportunities are very different now. It was always expensive and a hassle to IPO and it is even more so now. We’re also seeing a decent number of down-rounds even on the companies that do successfully IPO.

This of course goes back to an early point of making sure the valuations are reasonable because for an investor there isn’t much worse than a long holding period just to have an exit that winds up being a down-round and destroying value.

There isn’t much worse than a long holding period just to have an exit that winds up being a down-round and destroying value.

Speaking truth into the market

These reasons don’t apply for every startup or every investor, but they do for many. Some of you will read this and think it is just conjecture or nonsense. I’m okay with that. Many of those same people will scratch their head and wonder “why can’t I raise money” and “what’s going on in the mind of the investors” – but I’m telling you some of those answers now.

Unfortunately there is a very bad habit in the investing community where the investors listen to a pitch, ask a few questions, nod their heads, and say they have to think about it. Or they ask the founder(s) to keep them updated because it is a great idea but they would like to watch it a bit further. Quite often these are lies. I think they are unintentional lies, but lies no less. There are a lot of investors that have ruled out a venture halfway through the pitch but they don’t want to offend or upset the investor.

I’ve actually had founders thank me profusely for saying to them “I’m not personally interested in investing in this, and here’s why… but feel free to keep in touch with me if you want to bounce a quick idea for some feedback or want help making a connection.” Yes, they are thankful after I clearly say I’m not investing. The reason is they don’t have to waste their time and energy following up with me under the false hope that I’m going to help complete the current round.

We need more of these founders who value the truth, and we need more investors who are willing to speak the truth.

Think the valuation is too high? Think the market is too competitive already? Think the current traction isn’t impressive enough for an investment? Think the current team needs to prove themselves further first? You are welcome to your opinion – go ahead and share it. Chances are that if one investor is thinking something, others are too. It doesn’t mean everyone is, and the round can still be a successful raise, but if we all just communicated concerns more openly I think the entire process would be better.

Founders can address those challenges and then go back to the investors later… assuming that the feedback was honest and that the challenges have truly been addressed now. And don’t assume that today. Founders, maybe tell investors “hey, seriously, tell me some hard truth here if you have concerns – I want to hear it.” Let them know you want the feedback, and really be open to it. Don’t just get mad and don’t just think “well that’s just one person’s opinion” and ignore it. Use the feedback to your benefit.

Founders, what do you think?

Investors, do you agree, disagree, or have some other thoughts to share?