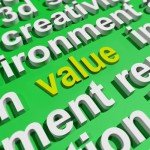 Let’s say you have a startup and you’re looking for funding. As part of the funding process, one – of many – things to discuss with be the current valuation of the venture. Perhaps you or an external source has pinned the current value of the business at $1 million dollars.

Because you know that angel and venture capital investors are often looking for at least a 10x return on their investment, you mention as part of your pitch that your goal is to be acquired in about five years at a $10 million valuation.

What does that really mean though operationally, strategically,… realistically? It’s easy to take a number and multiple it by 10 but from what I’ve seen in the local startup world so far, many founders haven’t taken it much further than that. What does it mean to get have a $10 million valuation on your business and how do you get there?

I recommend that every founder at least think though this process of getting from X to Y (and maybe to Z). I understand that there are so many data points and metrics and unknowns that anything developed today will very likely be different from reality months and years later. It’s the same thing with a business plan though. Initial business plans rarely play out as expected and they have to be adjusted over time as new variables and factors become clearer to management. Just because the year one version will be very different from the year five version doesn’t mean that the exercise doesn’t have value – it does!

Every business is different and businesses in different industries are valued in different ways, but let’s just kick around some numbers so you understand the exercise. You say you want to be acquired in five years for $10 million dollars. Okay, what will the financial picture need to be in five years to truly be worth that amount?

Research how businesses in your market are valued. It is a multiple of EBITDA? Or perhaps something based on top-line revenue? What are the average margins for your industry? If there are public companies in a field similar to your startup, what are their P/E ratios?

If you run through the exercise and realize that you’ll probably need 25% margins and $15 million annual revenue to reach a fair valuation of $10 million – that’s good information to know. What it does is at least draft a target for you. When you have even a rough idea of the target future picture you can draft a plan to get from here to there. What does the month-over-month growth rates need to look like? How many widgets/subscriptions/whatever do you need to sell monthly/weekly/daily to reach the revenue target? How do your gross margins need to look for you to achieve industry average net margins?

Doing a bit of legwork early on in the game gives you some targets to shoot for and helps model a strategy to achieve those goals. Otherwise you’re just throwing out random numbers because you think that is what people (perhaps yourself included) want to hear. Numbers and projections based on data – even rough data – is much better than numbers just put into a projection because you or someone else hopes and wishes that’s what they’ll be.

Want some direction or help with this exercise? Feel free to contact me and we can chat about it.